Fours of Swords and Cups, the King of Oros and Knight of Bastos

A spread of four randomly selected cards were chosen to accommodate the upcoming gypsy weeks -- living from cars and trailer/tent.

The spread began with the return of the card of that Muse of Mine: 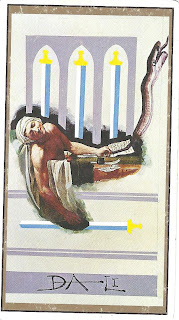 Indeed, this Muse is part of this annual trek away from home and habits.
This Four of Swords is followed by another encore appearance -- the excessive 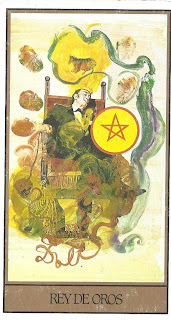 Rey de Oros. http://deedee-salvadordali.blogspot.com/2010/05/rey-de-oros-with-circe.html The King of Gold wrapped in a self portrait. What is he doing on a trek away from the abstract and into the concrete? Now that is something to ponder.

Then new cards for the third and fourth:
Cuatro de Copas -- the card of something not realized, a prize overlooked. 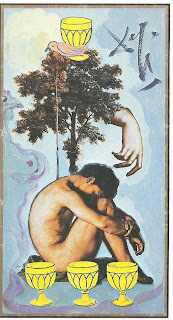 Such a sad card for Cups. Rachel Pollack links its sadness in this Tarot Universal Dali deck to the deck's Two of Cups. She sees them sharing the "darker side of sexuality."

It seems in its own way even sadder than the very sad The Death of Marat by Jacques-Louis David (1793) whom Salvador Dali took for his Cuatro de Espadas. Here, in the Cuatro de Copas, the self proclaimed King of Pentacles takes from Hippolyte Flandrin (1832) "Study (Young Male Nude Seated beside the Sea)." 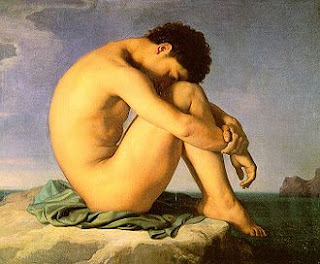 Whether sad or sexual or both, because the youth is not placed -- that is, there are no landmarks, no reference points -- this 1832 painting has been compared with Surrealism -- the 20th Century style brought to its zenith by Salvador Dali.

And followed by the Knight of Wands. 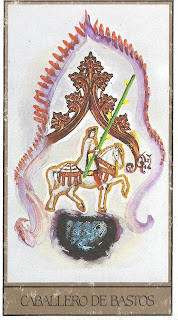 A premier appearance for Caballero De Bastos -- the Knight of Wands -- but not for Benozzo's Voyage of Three Kings which Salvador Dali also used to find his Knight of Oros -- the introductory card to this journey. 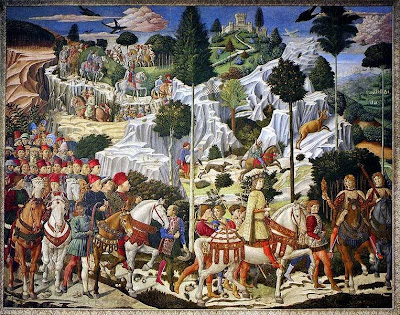 That seems enough for now -- a trek to ponder through the caravan travels in the weeks ahead. For it seems suddenly hugely obvious that this path must take a turn.

The Four of Swords. The King of Pentacles. The Four of Cups. The Knight of Wands.
All in the Minor Arcana.
Only two are pip cards -- both fours within a four card spread.
Every suit appears.
Ponder the path.
Posted by DeeDee at 8:40 PM