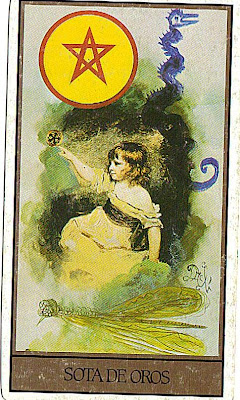 Following last week's Pentacles, there is surely money somewhere near. Or, as these cards suggest, it is the more basic meaning of the suit enlivening this time. Pentacles are not merely the coinage of the realm, they are our realm itself -- the Earthly realm.

Swords are air. Cups are water. Wands are fire. Pentacles are Earth.

Tres de Oros, the Three of Pentacles, the balance of the threes with the twist of spirituality which is requently captured in this Three of Coins card. In Tarot Universal Dali this Savior image is taken from the Master of Genoa, an anonymous painter of Bibles from the 13th century. 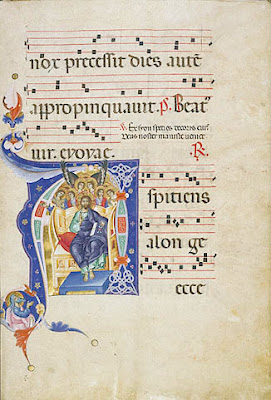 Very spiritual messages this week, and noteworthy for coming again and again from the Earthly realm.

Three is the number of completion, of wholeness. The tension of one - two dissolves into creation of a third -- woman, man, child; mind, body, spirit; a three-legged stool; a musical chord; the Christian trinity. Completion. Balance. Harmony.

The Page of Oros -- the child within the suit of the Earth -- is coming new to immersion in the world, or immersion into a new world. The page, of any suit, is the student, the child, the learner.

So what to make of both completion and novice from this two-card reading suggesting that the new knowledge is spiritual in nature but worldly in pursuit. It sounds the best of all words. It sounds wonderful. 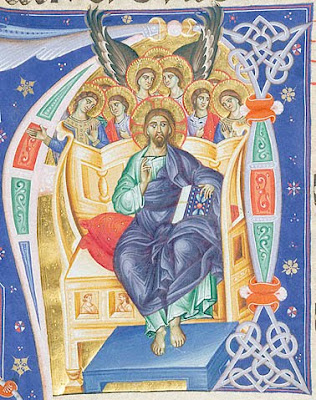 Although Italian, the anonymous Illuminator derives his name from the illuminations in a Bible now in Gerona, Spain. The influence of Byzantine icon painting is obvious as is his efforts -- prevalent at the time -- of creating three-dimensional objects on two-dimensional spaces in space. The efforts led to the later Italian Renaissance style.

Sir Joshua Reynolds, painting three centuries later would have captivated the Magician of the Tarot Universal Dali not only with his long and productive career as a portrait painter but with his theories of great art: "Invention, strictly speaking, is little more than a new combination of those images which have been previously gathered and deposited in the memory."
But what does Dali mean growing an ectoplasmic seahorse -- the creature where the male gives birth -- above and behind this child? And what with the delicate dragonfly below? Watery and androgynous. Of course. How Dali.

and two more in Tres de Oros at Christ's feet.

Comment: A momentous week of awakening to a new spirituality that touches so many elements. That seems enough with a single added imperative -- Remain open, as a child, to all that is offered. And then accept.