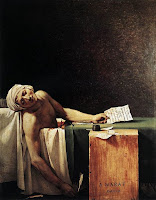 The Death of Marat by Jacques-Louis David (1793) -- revived by Baudelaire, who wrote in 1846, "This painting is as cruel as nature but it has the fragrance of ideals."

We will ultimately get to that assassination. For now, note: we have entered the Sign of Salvador Dali and Dee Dee Dali: the Zodiac Sign of Taurus the Bull began April 19.


According to the quirky, 1915, The Zodiac and its Mysteries A Study of Planetary Influences Upon the Physical, Mental and Moral Nature of Mankind, by Prof. A.F. Seward, ancient Jews considered Taurus the leader of the Zodiacal signs, Greek mythology credits Taurus with carrying Europa to her nation, ancient Chinese called Taurus the 'Golden Ox'.

Although a bull, Taurus is a feminine sign in the House of Venus.


Preparing as the Earth moved into this ancient and androgynous Sign of Taurus, for the regular posting of the Dee Dee & Salvador Dali exploration, a Muse of Mine selected Siete de Oros: 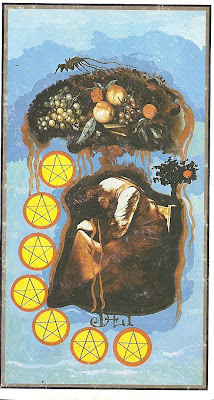 Again. The second time barely more than a full moon ago she also randomly selected the Seven of Coins from Tarot Universal Dali. (http://deedee-salvadordali.blogspot.com/2010/03/siete-de-oros.html).

This is what she wants from Dee Dee Dali: Traditional readings of the Seven of Pentacles offer three paths: Satisfaction; Disappointment; and Overcommitment. Look at the Seven Coins as Money.

You are not satisfied. You want Dee Dee and Salvador Dali to tell which one is the path to Wealth.

Unnecessary. You know which path is yours. That is the point. You know. You know because while paths are widely divergent, all readings of Pentacles (no matter by which name this suit is called: Coins, Oros or Diamonds) this is the suit of Money and all that implies.

Where is wealth?
The question returns over and over to this Dee Dee & Salvador Dali blog.
Here is something else, if you will not select which path: You can choose for yourself.
Where is wealth?

Did you know, when you Selected another card, that you can choose which path? Did you know when you rustled all 78 cards of Tarot Universal Dali back and forth through your hands, that you could choose? Did you know that when you selected the very seriously frightening
-- Cuatro de Espadas -- 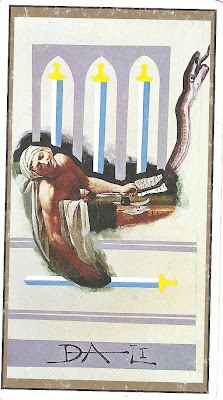 -- Four of Swords --
and then you spoke its connection to the Marquis de Sade.
Indeed.
Tarot Universal Dali delivers The Death of Marat -- Marat in a swoon instead of repose offered by the traditional decks. But it is more convoluted than that. Unlike David, who revered Marat as a martyr of the French Revolution, Magician Dali wends a snake from the revolutionary's hand, the hand that seemingly penned the page David filled in 1793 with words of largess and forgiveness.

The Marquis de Sade joined up with Marat in 1963 in The Persecution and Assassination of Jean-Paul Marat as Performed by the Inmates of the Asylum of Charenton Under the Direction of the Marquis de Sade, a German play by Peter Weiss. Typically shortened to Marat/Sade, it is a play within a play. Just as occurred within Sade's own his life, he is directing his fellow inmates in a play with philosophical asides to Marat.

The convolutions. The play within a play. The random repeat of the Seven of Pentacles. This Cuartro de Espadas itself "parodies" the traditional Smith/Rider's deck, says Rachel Pollack in Salvador Dali's Tarot.

"Fours," Pollack explains the traditional card in Seventy-Eight Degrees of Wisdom, "relate to stabilization; for the unhappy Swords this translates as rest or even just retreat. The image shows not death but withdrawal."

But of the parody,she writes in 1985, "The violence of life overwhelms the courage of the man struggling for social change ... terror destroying idealism."

NO. I reject this. I turn from the passive state of Swords: Sorrow and Unhappiness. Turn, if we must -- this Muse of Mine selected this card -- to the active state of Swords, the Suit of Struggle and Animosity. Consider these latter states the products of greed and envy. Of wealth. Of course. It is always Oros.