The Fool is the only unnumbered card of the 22 cards comprising the Major Arcana of the standard 78-card Tarot deck.

Many contemporary Readers and Seekers use The Fool as a tool to explore the other 21 Major Arcana cards which, absence this odd man, can be arranged in three rows of seven,
a rather perfect blend of numbers, actually.
Indivisible.

To begin: The Fool of the contemporary Tarot standard bearer: 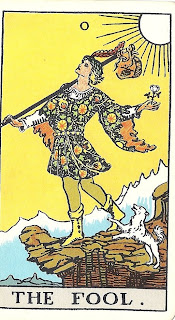 The traditional read is of naiveté, innocence, youth stepping blithely, blindly into life. Innocence perched upon the edge of the unknowable. The little dancing dog nips at the Fool's heels, chasing him on, perhaps, but even so, The Fool embodies freewill, youth with the sun at his back. Untested faith. "The Fool leads us to take risks," writes Rachel Pollack in "Complete Illustrated Guide to Tarot." "He calls to the child inside us, the part of us that wants to follow our instincts..."

Or it could be said, given the suspected cliff, He's cruisin' for a bruisin'.

Dali appears to capture his Fool at a different stage of the game. 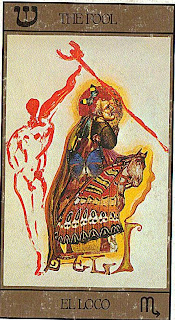 This man does not look unaware, nor does his steed, nor does his hovering androgynous ectoplasm complete with genitalia and iconic crutch. They all look like they've been around the block before.

Indeed, and not unexpected, from the start Tarot Universal Dali frees each card from tradition by the prism of Surrealism. Dali's crutches prop open the blinding layers of our sight, offer us glances into other worlds and realities. It is the Zero card. The Nothing Card. The No-thing. Already the crutch appears.

Each card also honors tradition by paying homage through style and form and texture to the symbols that have evolved through the centuries of Tarot. The expression on El Loco seems nearly to mimic Rider Waite and the crutch balances somehow parallel to The Fool's stick.

And still, again, Dali digs yet deeper, infusing the archetypal messages from Tarot with snippets via something akin to postcards from the epic human battles and grandest god-myths. He plucks these snapshots to drop into Tarot Universal Dali from the greatest of the known artistic masterpieces.

He plucked El Loco from Raphael.

The Sistine Madonna by Raphael. 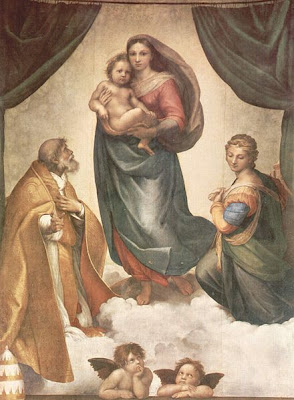 Raphael painted this man as St.Sixtus -- a Roman-ized Greek name meaning 'polished' -- worshiping at the feet of the Madonna. Madonna will always be in Salvador Dali's world, Gala.

-- more than muse or wife or model or inspiration -- Gala connected Dali's genius to the World.

The Fool transforms, draped in butterflies which transfigures El Loco into Don Quixote upon Rocinante. Don Quixote, who after all his adventures, died of a return to sanity forced by cruel practical jokers. It was a return he never wished.

Dali claimed Gala kept him from madness and early death.

Still the sun shines upon El Loco -- although perhaps from his Madonna and no longer at his back as with the traditional Fool.

Nor do symbolic dogs nip at heels his heels. Those nibbling impulses, more pronounced in other decks with cats and dogs biting The Fool's leg, are trivial to Dali who instead splashed a bloody crutch wielding ectoplasm down the card, revealing explicit impulses. Impulses which do not avert El Loco's gaze to his Madonna.

And though El Loco does not carry a youth's face, which arouses a suspicion of guile in place of innocence, Tarot Universal Dali portrays his face as serene, as trusting of life as are the traditional youths. There is a richness in this: Serenity despite the fear pulsating through his mount, the blinding impact of the sun, the full bodied awareness of carnal impulse and all of the psychology imbued.

Knowledge intact does not prevent us from being The Fool. Risk is life long.

Note: Raphael, with Michelangelo and De Vinci, is of the Trinity of the High Renaissance period of 1450 to 1527. Raphael died young, at 37. According to Giogio Vasari, father of art-historical writing and a contemporary, Raphael died from a too energetic night of sex which was subsequently misdiagnosed and thus mistreated. The result was death within a couple weeks.