With care I shuffled, cut to the left, accepted both the top and the bottom cards. The top was a repeat. http://deedee-salvadordali.blogspot.com/2010/03/nueve-de-copas.html -- the discomforting display of fortune. Indeed. Separately, plans began today to visit Salvador Dali's home. 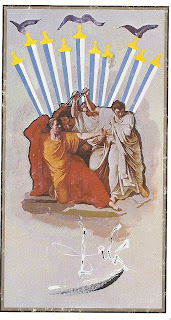 The bottom card was Diez de Espadas, the Ten of Swords, in Tarot Universal Dali vernacular it is Vincenzo Camuccii's "Death of Julius Caesar." 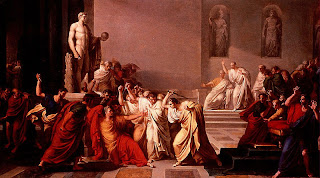 The assassination a result, paraphrasing Wikipedia, of a conspiracy among 40 Roman senators. Caesar had recently been declared dictator perpetuo by the Senate, which left some senators fearing Caesar's ambition would overthrow the Senate in favor of a tyranny. The assassination led to a civil war that replaced the Republic with the Roman Empire.

Seeking a gentler path ... easing up on that violent image, the number ten always marks some ending -- in all the suits. And thus always foretells of a beginning.

Seeking a gentler path ... in the traditional decks ten swords pierce a man's back. Overkill, says Rachel Pollack, a meaning echoed by many. "The very extremity gives us a clue to release from the turmoil," she writes in "Complete Illustrated Guide to Tarot."

But she writes of the obvious in "Salvador Dali Tarot" -- she writes of "betrayal ... treason against friendship as well as social order."

Seeking a gentler path there Rachel Pollack also writes of the birds flying above the scene. She says they "relieve the violence."