You've seen her before, the Roman virgin huntress, Diane. But

this past week's end she coupled with the Five of her same suit, Cinco de Espadas. 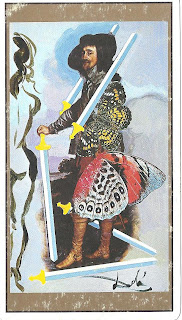 Anthony Van Dyck's 1634 portrait of Charles I shows the king as "master of his world" in the words of Rachel Pollack in her Dali Tarot. Except, she says, in Salvador Dali's re-casting there are the butterflies. 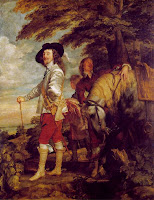 For them both, Charles and Diane -- as it were -- the ectoplasm seduces these indivisible numbered Swords and draws them each forward.

It is beyond even Renewal that these cards speak. It is Awakening. All is Anew. Untested. Not yet contrived. Something base and sexual and unacknowledged, calling us into our futures.

Are you listening? Are you hearing?

The journey -- and the cards seem to hint it has only begun -- appears to promise great difficulties. So say the swords upon swords. And also deep singularity exists in the coupling of mystical number 7 and 5, the card of loss. Both are prime numbers. Neither able to divide into equal quotients.

Using Numerology, as is the way with Tarot, the combination of the cards is the already heavily weighted and freighted number 12. 12 disciples, 12 virtues, 12 vices, 12 months, 12 gods of Egypt. Then the numbers 1 and 2 are added together. Three, 3, the number of harmony.

Harmony develops as the numbers progress; it is a future state. Rightly so. Harmony is not associated with Swords. There is no particularly pleasant state of affairs found amongst Swords. The suit bespeaks difficulties. But also resolutions in action.

The Magician chose that dark Van Dyke to say: No! to repressed "romanticism" -- plucking again from Pollack's work with Tarot Universal Dali. Dali, indeed, demands No! to all repression. Cinco de Espadas under The Magician's hand demands repression transform. These 12 Swords demand Metamorphosis.

These cards came to me from a woman whose randomly drawn Significator -- Sieta de Espadas, Diane -- appeared here Feb. 11, 2010. At my request, because of the duplication, she selected at random a second card. The famous portrait of Charles I by Van Dyke emerged.

Van Dyke's self-portrait at 15 shows him a prodigy as was The Magician.

Before week's end transitioned to week anew, http://www.metamorphosiscenter.com came to me, as unanticipated as Charles and Diane. Metamorphosis emerges. Investigate at your pleasure. Enjoy the layers upon layers of life; enjoy their laying and their lifting.

Dali chose amongst the other Masters in his lineage, the European Masters, to layer the Tarot he created for his Muse Gaia. The Magician used crutches on his own canvases. But here he used his ancestors' Christian, civic and mythological visages and visions to introduce new realities into the conventional symbolism of the Tarot. And The Magician did more. He used these Masterpiece troves to redirect, perhaps even deliver a pathway around a destiny better averted.

In the Cinco de Espadas, The Magician softens the blow of Rider/Waite's emphasis, which is upon the gloating victor, the defeated relegated to the background.

Thoth goes straight to "Defeat," erasing even the victor.

Charles does not gloat, though he is self-satisfied and self-absorbed.

The Magician does not seek a lesson built upon that. He seeks the lesson of Metamorphosis from the butterflies. Surely, suggests The Magician, there is nothing gained casting ourselves into the game of Victory or Defeat.

It is a very difficult time, a very complicated time. Everywhere, for everyone. We must become butterflies, develop as our instincts instruct, accept metamorphosis as the true change that brings Harmony, which demands the 3rd leg, the teeter-tottering of victory and defeat cannot achieve balance.

Visualize the Chinese handcuff toy, feel the woven tube fitting both index fingers nail toward nail. Pull and pull and it tightens. Relax and all falls loose and free.
We must open ourselves to new worlds, frightening only from unfamiliarity. Just like the caterpillar, it is unlikely we always visualize what is to come.