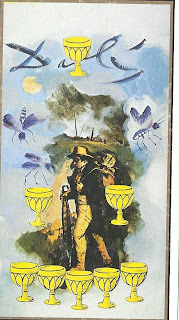 The Eight of Cups. That slippery element, water, is the element of the Cups. The Eight of Cups universally seen as the slipperiness of leave-taking, a moving away, a card representing the leaving of much behind.


In Tarot Universal Dali The Magician surrounds his centerpiece with insects and darkness. 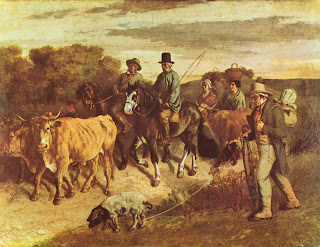 Courbet has him lead a pig. Of lesser wealth than others in the painting, but still the farmer had some wealth in the pig.

It is wealth, success, stability that the traditional Eight of Cups suggests is left behind when this card appears.

What is to be made of this?

And where has Tarot Universal Dali placed this farmer of Courbet's? The distance landscape -- is the farmer thinking it or is it real? -- looks like a Dali landscape.

Comment: Nothing is real.
Posted by DeeDee at 9:07 PM