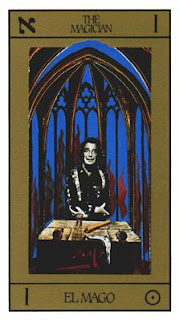 I am packing for a journey to Dali's home in Cadaqués, Spain: How could it be anything but a day for The Magician?

Or in Tarot Universal Dali's Spanish, El Mago. No matter the language or the contrivances of this Tarot's creator, El Mago remains the opening card of the active Major Arcana.

By that adjective -- active -- I refer to a technique prevalent among Tarot readers and alluded to in the first post of this new venue:

The technique uses The Fool (-- El Loco in Tarot Universal Dali --) as the subject. The Fool is considered an infant, without imprint, an unformed psyche and proceeds to traverse the rest of the Major Arcana's 22 cards. (The full Tarot consists of 78 cards. This includes the 56 cards of the Minor Arcana which more closely resemble contemporary playing cards than do the 22 of the Major Arcana.)

Taken from the deck in this manner, this odd man out and carrying the number zero, this Fool, El Loco, faces the challenges of three rows of seven cards. Imagine it as a virgin psyche moving through three levels of self-awareness.

The first row of seven cards represent that which is Universal and beyond Human contrivance; the second row is that which Life imparts and imprints upon us; the third is that which we use to act upon Life.

The Magician is the complete and all seeing, the One, the Father; all knowing and thus the keeper and dispenser of the mysterious life-giving force of inspiration that powers creativity. It is this unknowable hugeness that first greets the innocent, unformed and uninformed who like The Fool is thrown naked into Life.

No surprise who Dali casts in the role of the Omnipotent, the Creator.

In her Complete Illustrated Guide to Tarot (published by Element, a HarperCollins imprint), Tarot authority Rachel Pollack describes the first seven cards of the Major Arcana as representing higher consciousness, the next seven the unconscious and the final seven the conscious.

(This is a very abbreviated gloss of Ms. Pollack's much more profound elaboration in her chapter on Symbols and Structures that Tarot readers access.)


Ms. Pollack notes the typically open stance of the Magician depicts "the body as a channel for power. Artists and writers -- like ritual magicians -- know that the ego,

the conscious self, does not really create anything. Instead, all our training and preparation serves to allow us to get out of the way. Something moves through us. Something that wants to be created. This is what it means to experience."


In her Salvador Dali's Tarot, (published by the Rainbow Publishing Group Limited) Ms. Pollack reaffirms that El Mago "represents the creative principle, the spark of light that begins existence."

But she notes in this card, one of two self-portraits in Tarot Universal Dali, the Magician Dali's "crossed arms, a sign that the artist retains his inner mysteries."

And she proffers a warning regarding another variance in Tarot Universal Dali from the more contemporary benchmarks, the Rider-Waite Tarot or Aleister Crowley's Thoth Tarot (shown, respectively, above).

The flames, she writes, "remind us that the creative, or 'masculine' principle ... perceived as a flame ... can either destroy or transform." 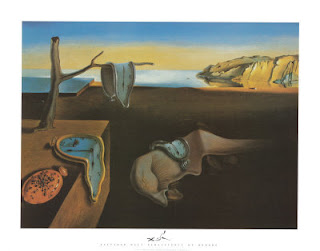 This last bit first struck me as an odd take.
Dali named the work, The Persistence of Memory.
Then Realization:
Memory is as eternal as it is persistent.
Only cultural habits cast eternity as exclusively an Unknowable Future.
Eternity is now.
Our lives are played out in its midst.

This re-casting seems an important lesson from El Mago. A lesson I suspect passed along to La Sacerdotisa

via the scroll she holds so similar to that upon Magician Dali's table.

The High Priestess, La Sacerdotisa, balances, conducts, guides the wild and untempered creative force; she is the channeler of unleashed flames.

The Magician is Fire.The High Priestess is Water. And they are connected by words. Words. Merely mnemonics once you get down to it.