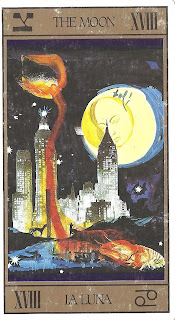 Midstream in the great celestial sea of Aquarius a postcard-arrives of New York, Night from O’Keeffe’s urban period. Randomly selected but inevitably drawn from the Tarot Universal Dali is La Luna of the same skyline. Different perspective.

Ectoplasm (from the Greek ektos, "outside", + plasma, "something formed or molded") is a term coined by Charles Richet to denote a substance or spiritual energy "exteriorized" by physical mediums. (sayeth Hellboy Wiki.)

Undercurrents and crustaceans, baying hound and wolf, even the crescent moon links La Luna to the traditions of Card XVIII of the Major Arcana. But Tarot Universal Dali puts an angry, startled face inside the crescent making a full moon at full powers. And the gateway is not merely fraught with baying canines, but blocked by the great ectoplasmic claw climbing out of the subterranean.

Tarot Universal Dali’s La Luna is simply too much. It is more than the indication of an awakening into the subconscious – for that is who the Moon is. She is not rationale, she does not see this world or any other in the light of Sun. It can be no other way for the creator of the Paranoiac-Critical Method which demands drawing forth the Subconscious.

Comment: La Luna is the card of letting go, embracing all that is unseen but must be embraced; Accept this night that there exists no road map for your journey. Embrace the scuttling of your dreams and your denials. Claw beyond the baying at the gates of and even above all that is organized and well lit.