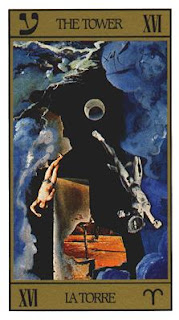 The Tower. La Torre. So soon. In merely the passing through Aquarius. Already, all falls apart.

And another Number Seven – from the one plus six of this XVI of the Major Arcana – Seven – Seven which demands opening, experimenting, risk.

Tarot Universal Dali offers no new twist on Le Torre. The Tower represents that made from human hands. Tarot Universal Dali repeats the truth that all so wrought will crumble. Is crumbling.
All that is known, has been known, all that held true, all that has been safe for what seems so long as to be our own personal forever – but it is not, Our Time is only a piece of this short spell called Lifetime – all of this, all of what we hold will shatter. We will fall from our towers. We are falling.

“This is the tower of ambition,” writes Eden Gray.

But it is not only that. Resurrection requires death. For when all crumbles and disintegrates, something is born anew. The Tower counsels passive acceptance of the flimsy material foundations, acceptance of resurrection anew. 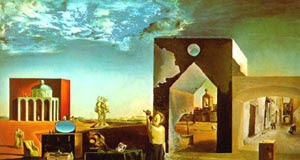 Tarot Universal Dali takes first from the master himself – The Tower itself is snatched from Suburbs of a Paranoiac-Critical Town Afternoon on the Outskirts of European History (1936) and allows that almost all of that elaborate and complicated scene of a world facing the Spanish Civil War has already lost root and all that still stands is the small central tower, and it has lost its grounding. The snatching left Gala behind, Tarot Universal Dali instead centering the crutch which Dali used to prop up reality, one world midst another.

And also falling through those clouds is the pinnacle feat of America ripped from Dali’s own, Poetry of America (Cosmic Athletes) (1943). There is always falling. Failure. Loss. Disintegration. Decay. 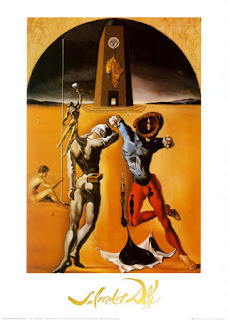 There is no way to prepare. There is only willingly accepted defeat, true manly beauty shining forth through passive, even ecstatic response to martyrdom – as Dali believed of his revered St. Sebastian. And there, falling with all the rest of the material world, is St. Sebastian, from Pietro Perugino, perhaps inspired from Madonna and Child Enthroned with .St. John the Baptist and St. Sebastian (1493). 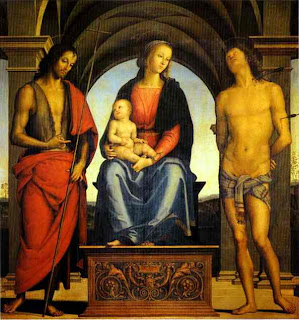 Tarot Universal Dali reminds us, as with the better known Christian resurrection story, that St. Sebastian promises Good News emerging from the shattering of what was known and believed before.

Comment: Dedicate this week to search for the core of life, the kernel inside that is true. Feel the prodding of the sharp Seven of Swords that led to The Tower. Accept La Luna guidance and dig below the conventional and consciousness. Trust that the duality of the Two of Cups exists even within a single heart.

Remember. Aquarius began with hard struggle. And now, all that has been clutched and carried forth shall be loosed. Enter Pisces swimming in a new element, unfettered and free.