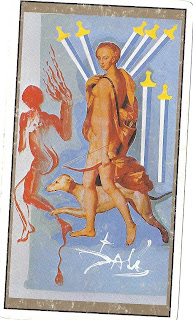 Siete de Espadas -- a very sneaky card -- Tarot Universal Dali follows Rider tradition again -- plucking the coy "Diane Chasseresse" from the School of Fontainebleau and pasting her into the sky. Why should the Roman virgin huntress throw such a coy look out to you? Why does she echo the man stealthily carrying-off five of Rider's seven swords? 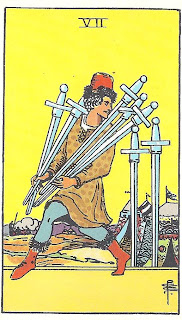 Seven seven seven -- how could such a good luck number turn so devious?
Seven is the card of wisdom, of cycles and completion: seven days in a week; astrology's seven personal planets, there are seven virtues, vices and sins. Juliet Sharman-Burke of The Center for Psychological Astrology
www.cpalondon.com/staff/juliet.html writes, "Inherent in this number is a sense of completion of a phase." 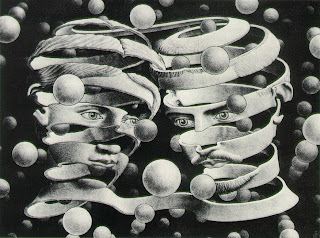 swords -- Swords, Epees, Espadas -- they are all Air. Swords is not the suit of action, the cards do not denote clashes of metal upon metal, skin or bone. Do not think clashing swords and clinking battle. Do not think of sound at all. Think silently of the Air swooshing invisible and mute. Think of the Swords as slicing and slashing the air into curls and eddies all about you and through you.. 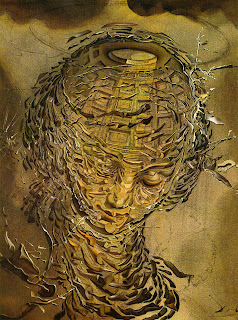 Think. Think. Think. The message of the Swords is Cerebral. Go forward but beware uncertain counsel. The Tarot Universal Dali offers the ectoplasmic woman of fire and blood, tiptoeing out of this frame, gesturing for you to follow. Can this possibly be safe?

Comment: Cerebral action as Aquarius enters its cusp with Pisces. Fire and Water ahead. Whether this coming week's flight is wrapped in Wisdom or Ignominy all is entangled and full of complicated strategy and perhaps even duplicitous diplomacy.
Beware, warns Diane, of that uncertain counsel nagging over your shoulder. Beware as Tarot Universal Dali draws you with heat and passion from this certain frame and into the Air.