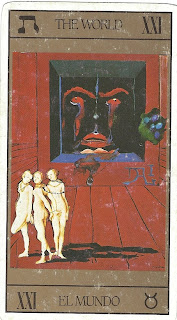 El Mundo. The World. The culmination of the Major Arcana. Tarot Universal Dali strays far from contemporary tradition which suggests The World symbolizes the ultimate immersion in the all-knowing. The World, writes Rachel Pollack in the Seventy-Eight Degrees of Wisdom, suggests "freedom and rapture beyond words."

A deep darkness stares -- over an offering? a sacrifice? -- into the persimmon chamber where the Goddesses are chained.

Tarot Universal Dali plucks Hera, Athena and Aphrodite from Lucas Cranach the Elder's "Judgment of Paris." Are they imprisoned here? Does Salvador Dali perhaps puts them in their rightful spot? Their vanity unleashed ten mortal years of bloodshed.

Their tale lies at the feet of Zeus, the God in Charge, whom they asked to declare which among them the fairest. 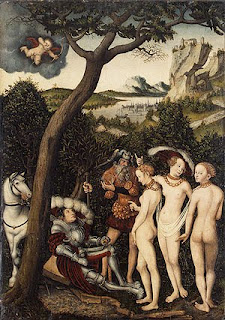 Zeus, a wise fellow if not a very responsible god, hands the task off to Paris, a charming mortal. Each Goddess makes promises. Paris considers the offerings and goes with Aphrodite who gives him the love of the fairest mortal woman alive. Helen of Troy.

And thus is launched the Trojan War, over the countenance of a woman and the frivolities of the Gods.

Does Tarot Universal Dali leave us there, alone, with Goddesses oblivious to their folly?

The Magician Salvador Dali takes liberties with Cranach -- as Cranach did in his own time and as he did to himself as he aged, as he gained the world. Salvador Dali readjusted Cranach's "Judgment of Paris" painted in 1512 with something of Cranach's 1530 "The Golden Age." 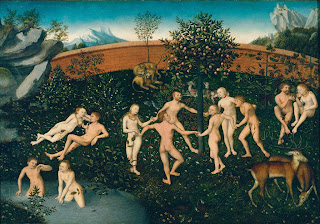 Cranach himself made the connection.

Do you see her? There in the heart of both of his paintings Cranach has her watching you. Still watching you.

Who is she? Is she Aphrodite herself?

The King of Coins, The Magician, Salvador Dali has reversed her stance. Has she learned in El Mundo? Unlike in Cranach's depictions she stands in El Mundo as do the traditionally celebratory women of the culminating card of the Tarot's Major Arcana. Her right foot is grounded, of this world, her left uplifted her soul released and free -- she is the world's dancer 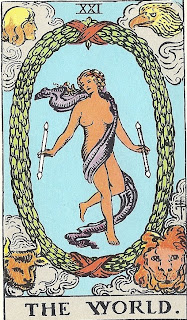 mirroring both the Rider and Crowley Thoth decks. It seems Adjustments can be made. 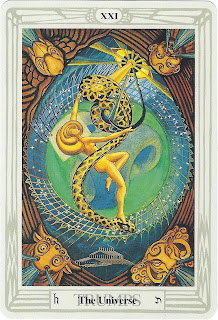 Comment: Seek reversal. In El Mundo the Master of the Illusion has not precluded that it is the all-knowing Goodness/Goddess holding that thin chain, that it is the darkness and the bloodshed locked outside, held at bay.