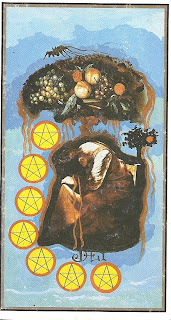 Seven of Coins. Tarot Universal Dali mocks tradition and embraces it. Mary Magdalen takes a moment -- her fruit of accomplishment cerebral and ready to turn back into the earth.

Dali plucked this mourning Mary Magdalen from Caravaggio's Death of the Virgin turning her into an Earth Mother of Tarot Universal Dali.

The Caravaggio was the last Catholic painting to depict the Virgin Mother as clearly dead before assumption. It was rejected by the parish for which it was commissioned in the early years of the 1600s. -- http://en.wikipedia.org/wiki/Death_of_the_Virgin_%28Caravaggio%29.

Caravaggio was already notorious. So notorious that he surfaces again today in 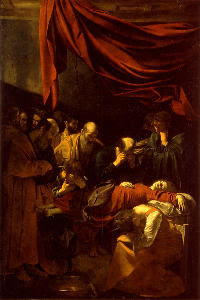 -- Caravaggio surfaced in Italy just in time to attend the celebratory 400th anniversary of his disappearance. http://www.independent.co.uk/arts-entertainment/art/news/csi-caravaggio-the-cold-case-gripping-the-art-world-1920127.html

Mary Magdalen, chosen by the Tarot Universal Dali to weep within a cave -- as Caravaggio intended -- is also placed in some type of optically alluded helmet -- with blood. There weeps Mary Magdalen behind the face plate of gold and beneath the bleeding helmet of overripe fruit. It appears Tarot Universal Dali made parts of Caravaggio's Still Life With Fruit On a Stone Ledge topple. 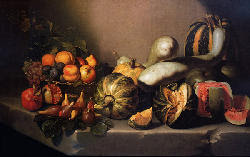 A bat is prying into the cranium. And at your back, Mary, the tree and that damn apple, right there over your shoulder as it must always seem to be.

Comment: Time marches on. Pick yourself up, Mary. Step past the tiny armor of coins -- so flimsy compared with the weight of the earth on your shoulders. Gold cannot protect you from the earth that hovers above you. Stand and step out from under and from behind. The time for mourning the past is over. The virgin had to die sometime. That's just the way the story goes.
Posted by DeeDee at 12:24 PM