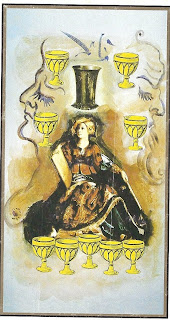 It is as though parents sit in judgment in this Tarot Universal Dali Nine of Cups. Indeed, there seems always to be a tinge a guilt in this card of compromise. It is the mixed message of accumulation as successful and indulgence as despicable. 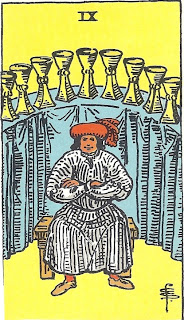 Traditional decks, such as the Rider deck, show a man bursting with earthly bounty. Appearing in a read, representing yourself, of course this card can be embarrassing, disclosing an unfettered celebration of the earthly self and an indifference to the deeper life, the spiritual path, others' want.

Dali the Magician, the Transformational, chose "Circe (or Melissa)" painted ca 1520 by Dosso 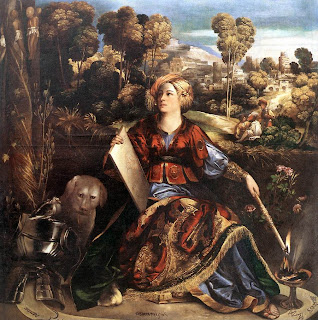 Dossi as the satisfied center of the Nine of Cups. She appears a transformation between bad and good.

JudithYarnall insisted in Transformations of Circe: The History of an Enchantress, that this painting of Dossi's is not Circe the enchantress, it is perhaps, at best, Melissa. But is possibly the much worse Alcina, the beautiful sorceress who seduces knights then tires of them and turns them to stones or into animals or plants. It is Melissa who changes them back. Magic worthy of a Magician is this Sorceress of Transformation.

What can be made of that? Today, in the waxing fullnes of Aires, the Prince of the Celestial Signs, there appears the fullness of the Nine of Cups, Nuevo de Copas. And within this Tarot Universal Dali there is even a tenth cup -- a chalice above the Sorceress and deeply embedded in the minds of the elders that surround the Sorceress.

Comment: Today's arrival of the Nine of Cups -- a cup of fullness and reward and pleasure -- both closes the Gregorian calendar's first quarter and opens what ancients believed the first of the Celestial year with Aires.

The struggle of parental/societal bonds and bondage continues past the close of the winter quarter and through this Nine of Cups into Spring -- this struggle with societal restraints presented itself as early as the movement from Aquarius into Pisces with Dos de Copas http://deedee-salvadordali.blogspot.com/2010/01/dos-de-copas.html. Now, still today the ectoplasmic images entomb the Sorceress.

Spring is the time to outgrow this.
Posted by DeeDee at 8:40 AM